skip to main | skip to sidebar

I stood there for about five minutes or so, watching this man fix my footwear on a sunny afternoon a few months back and I heard his friend discussing with him about philosophy and politics, even as his hands were working and it was no nonsense talk! He spoke about karma and mentioned the sufferings of few people he had seen in his life and some political figures of those days he believed have faced misery in their lives because of their wrong doings. This guy, he wasn’t dressed in a saffron robe nor was he an hairy old guy and the cobbler was not the weeping disciple at his footstep seeking enlightenment on life. They were just two ordinary looking, hard working men in lungi, who were discussing life and the virtues of being good from the knowledge gained by observing life around them. The discussion between the two went on peacefully as the cobbler did not seem to have any contradictory views and he totally agreed to what the other man said. I don’t know what surprised me more, their wide knowledge or the ease with which they understood the meaning of life.  The last thing I heard the man say, as I moved from there was, " if your thoughts are good and acts are good, everything that happens to you will always be good". How true! 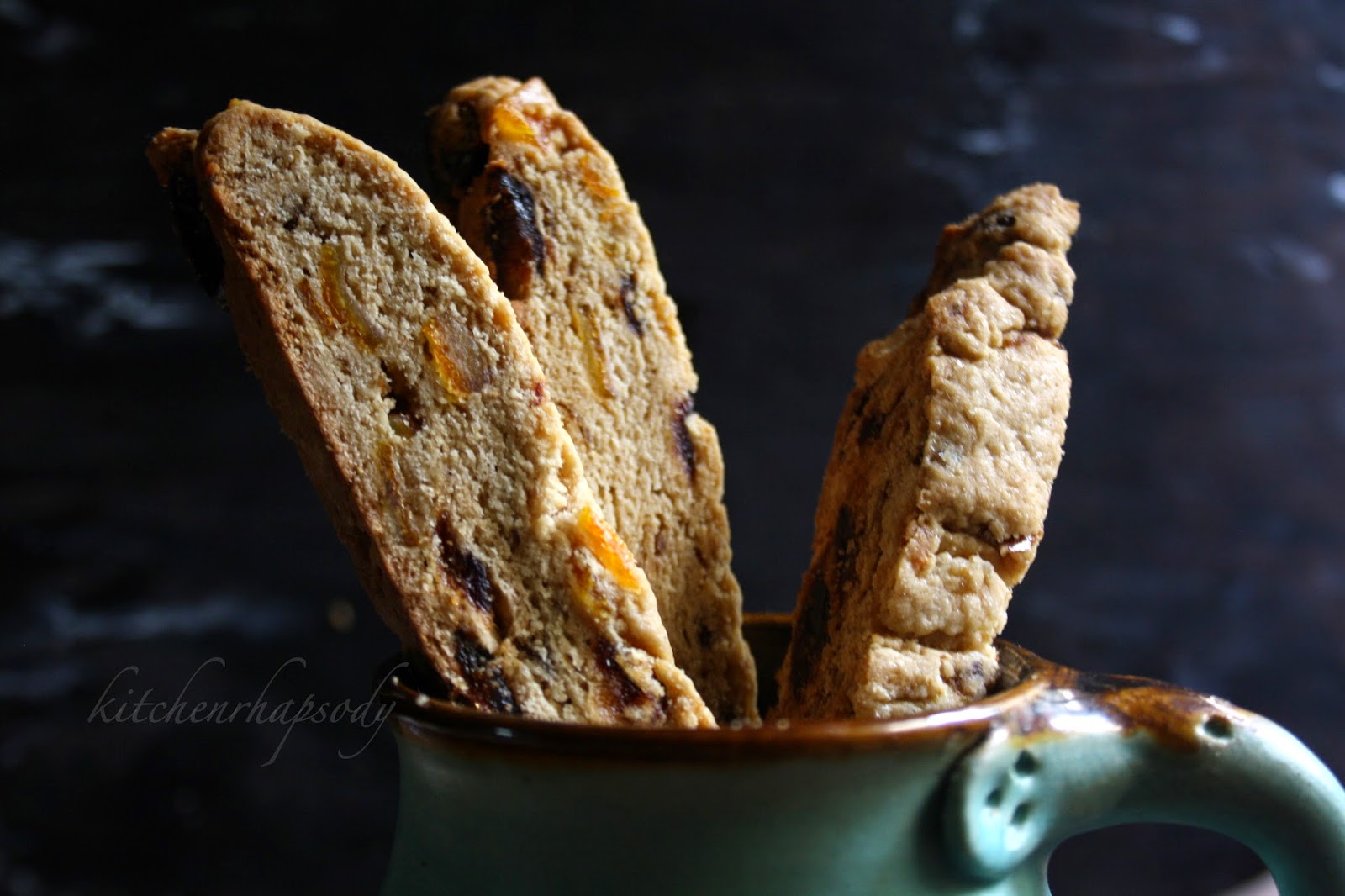 In a country where spice rules our taste buds, it is surprising that Tacos and Pastas have found a place in our dinner chart. So have the Banofee Pie and Tiramisu which has displaced pakoras and kheers in the menu. I don’t find anything wrong in embracing new cuisine but everything goes wrong only when we let it overtake our food culture. I love food and I wish to taste every delicious food in the world, but I still know what I love the most, the imbibed taste of food that I grew up eating and one that I will always long for. I love Italian sphaghetti as well as egyptian pita bread, but, if I were to choose my food from an array of different cuisines, I would happily settle with a plate of rice and curry as that’s my comfort food. 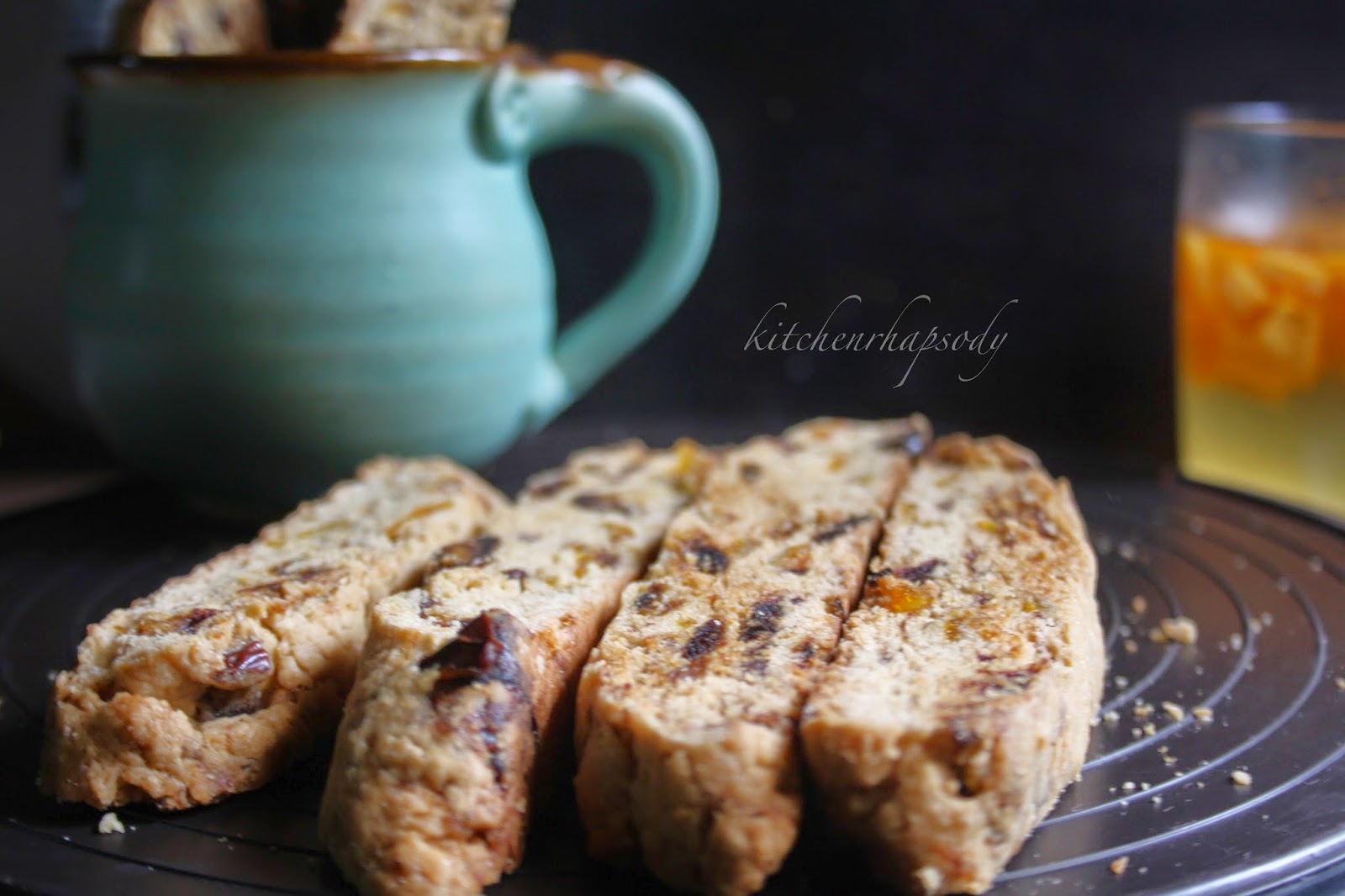 Speaking of biscuits in my previous post, how about my version of the classic Italian biscuit recipe, sans the nasty egg smell which always keeps me away from regular biscotti and danish cookies. I avoid those cakes or croissants and those puddings or pies that smells eggy. One can never see me eating an omelet for the same reason. The yolk in the egg is the culprit that usually plays the spoil sport in most of the recipes, so when only egg whites are used, it generally goes unnoticed and that’s why I love this recipe! Fat and healthy looking crows around my kitchen will tell you how I don’t waste those unused egg yolks!
I don’t really fancy dates, as it's got a boring taste that you get tired off after eating a few times. But when I do eat, I chew dates and fresh coconut kernels together which tastes delicious and totally filling. Dates and Candied orange Peel was a surprise flavour combination when I first tasted it and I have noticed that almost everyone loves the combined taste of the duo. But, in this recipe, if you are adamant about not wanting to use dates, you can substitute with pistachios or dried apricots. I have made these biscotti several times, which we always enjoy and it is the standard recipe that I tweek to try several other combinations. 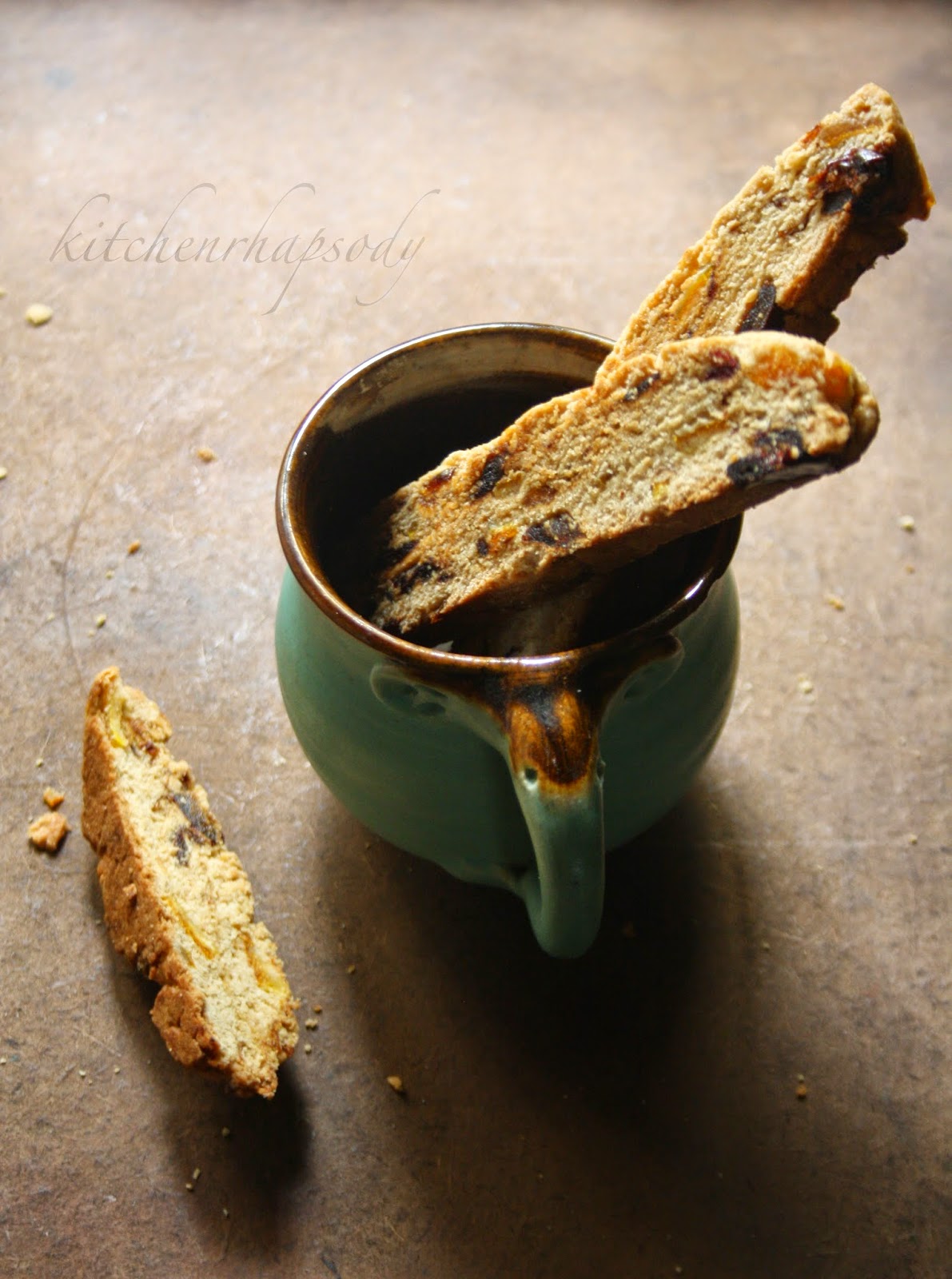 Add zest of an orange for an enhanced citrus flavour (optional) 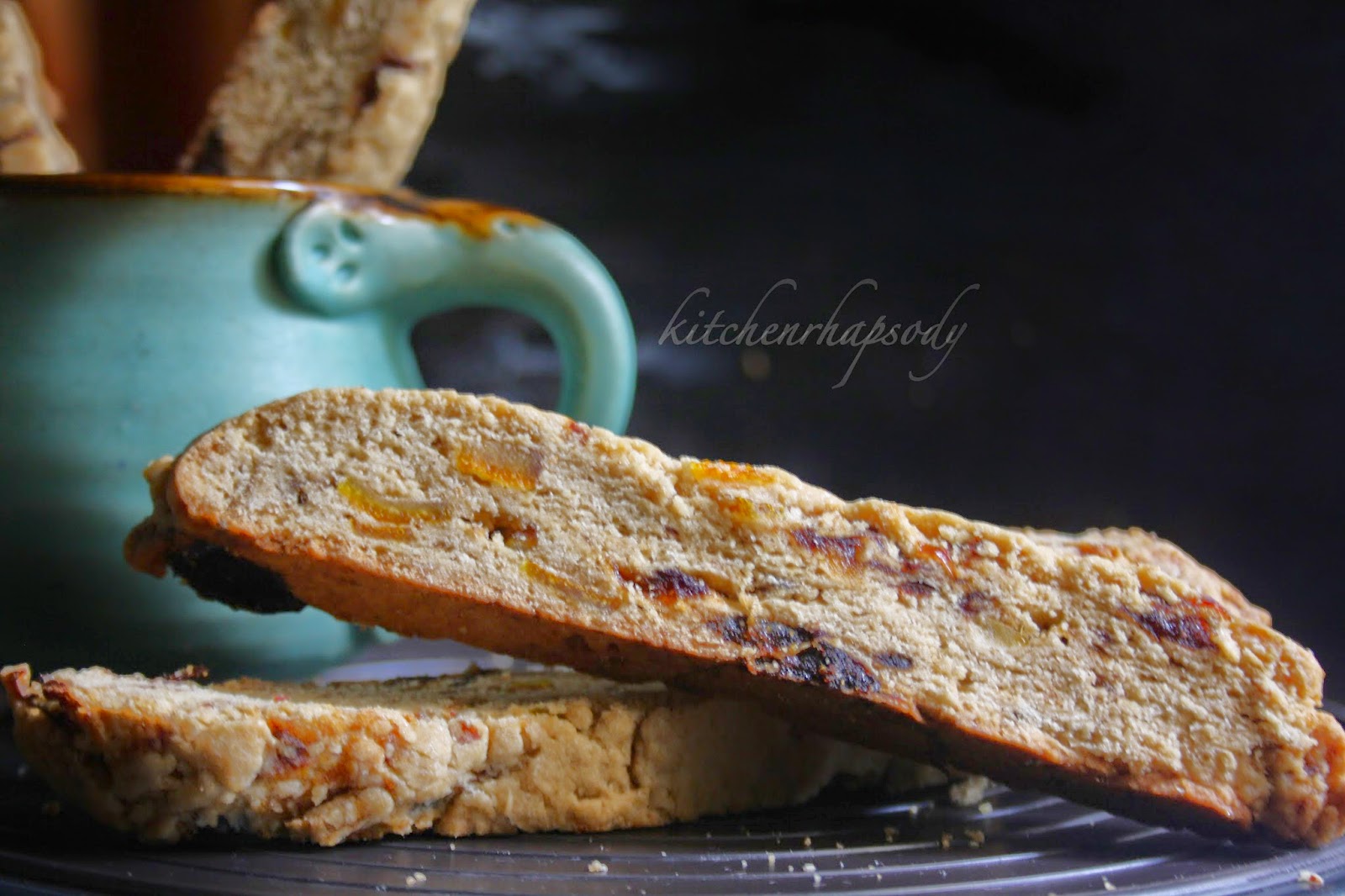 Method
Add baking powder to flour in a bowl.
Add the sugar and mix well.
Add oil/butter, egg white, chopped dates, candied orange, vanilla and mix well to form a dough.
Add milk if necessary and gather everything to a soft dough.
Make an elongated shape, flatten slightly and bake in a greased baking sheet in a pre-heated oven at 160ºc for 30m. 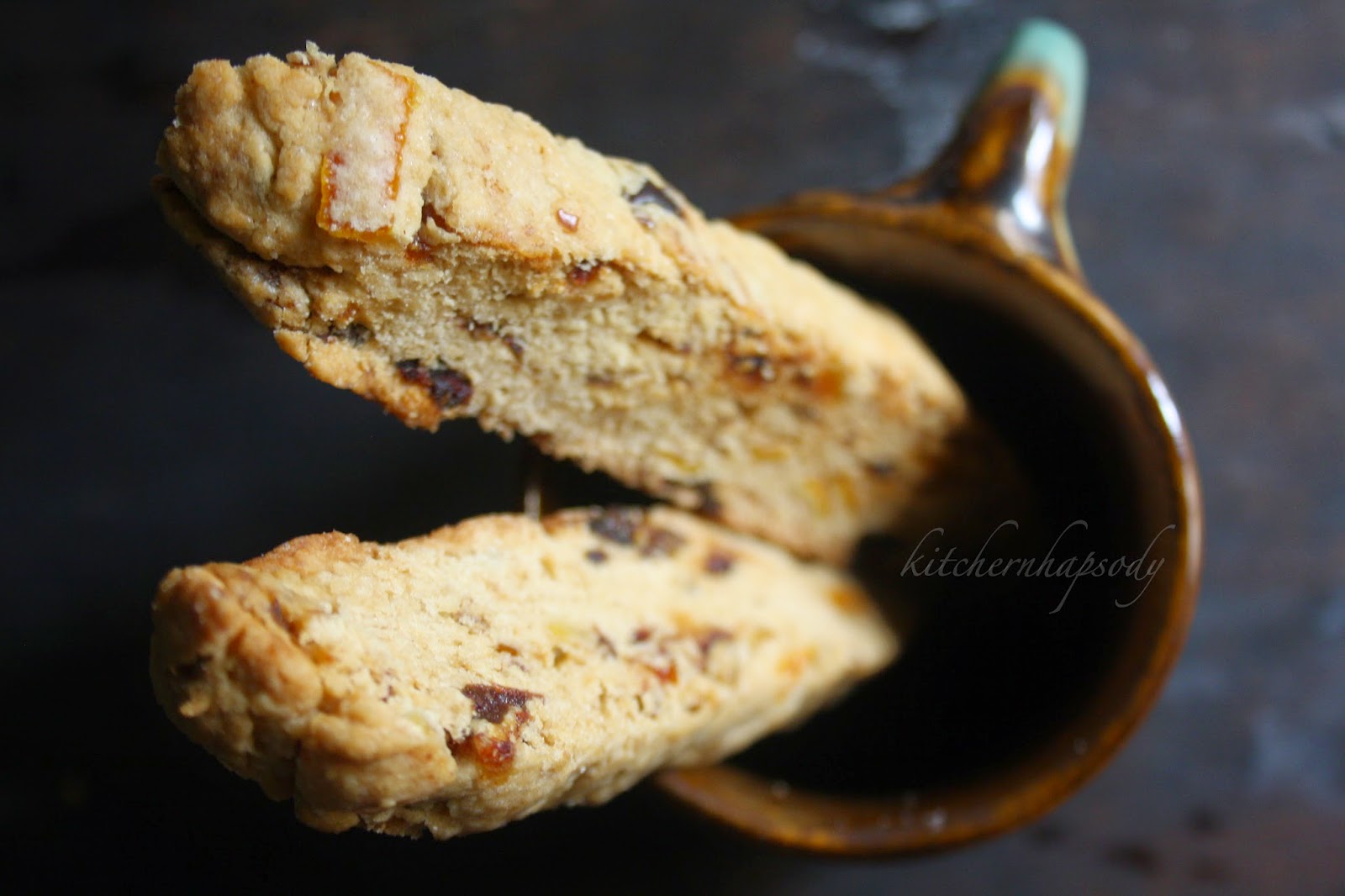 Let it cool, make slices and arrange them on the baking sheet with enough space and bake for 15 m. Store in an air tight container to retain its crisp texture.
If you can’t bake, then you can simply devour some deseeded dates filled with candied orange peels and enjoy!
Note:
You can use loosely packed sugar  if you don’t have a sweet tooth. 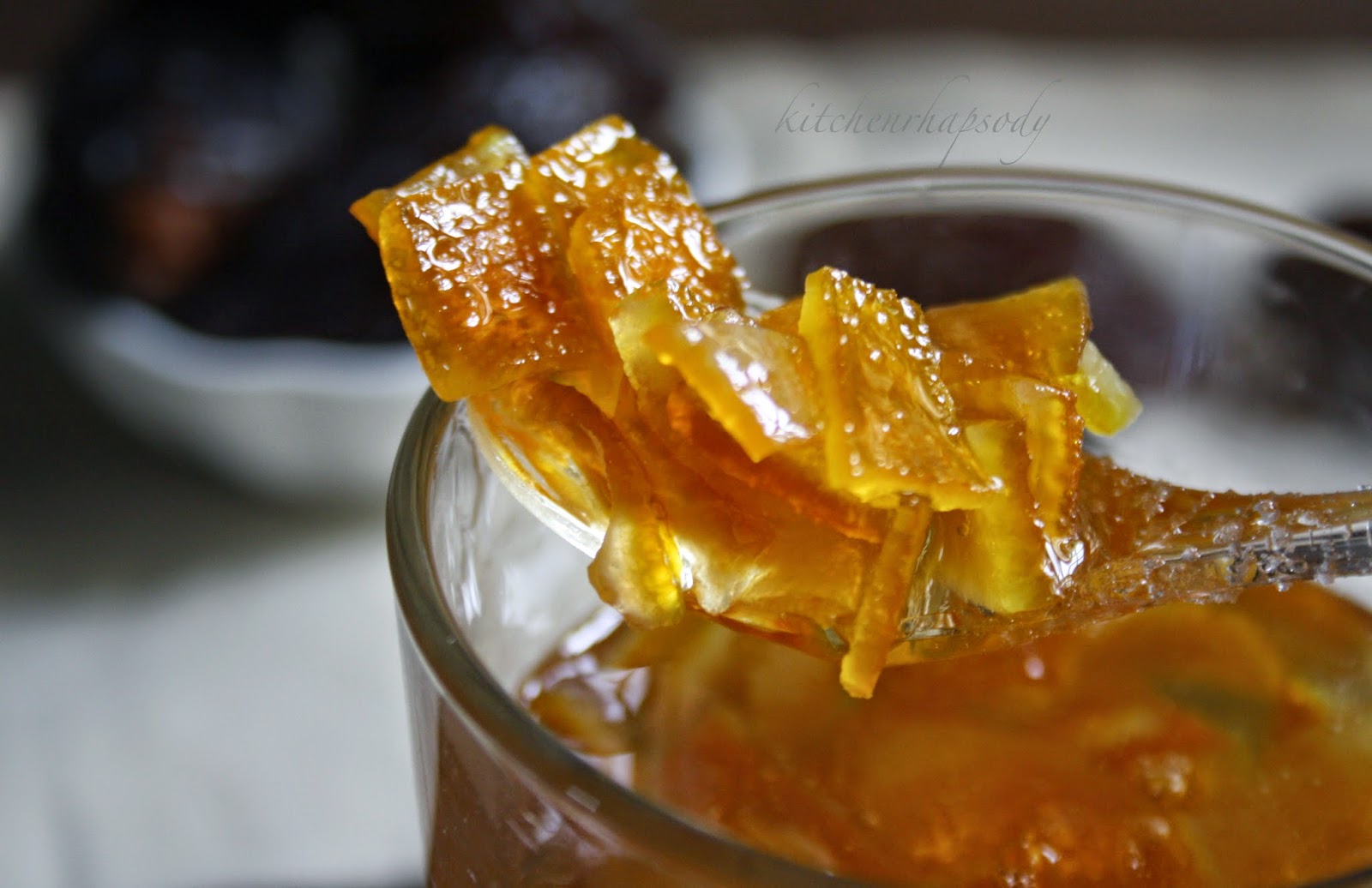 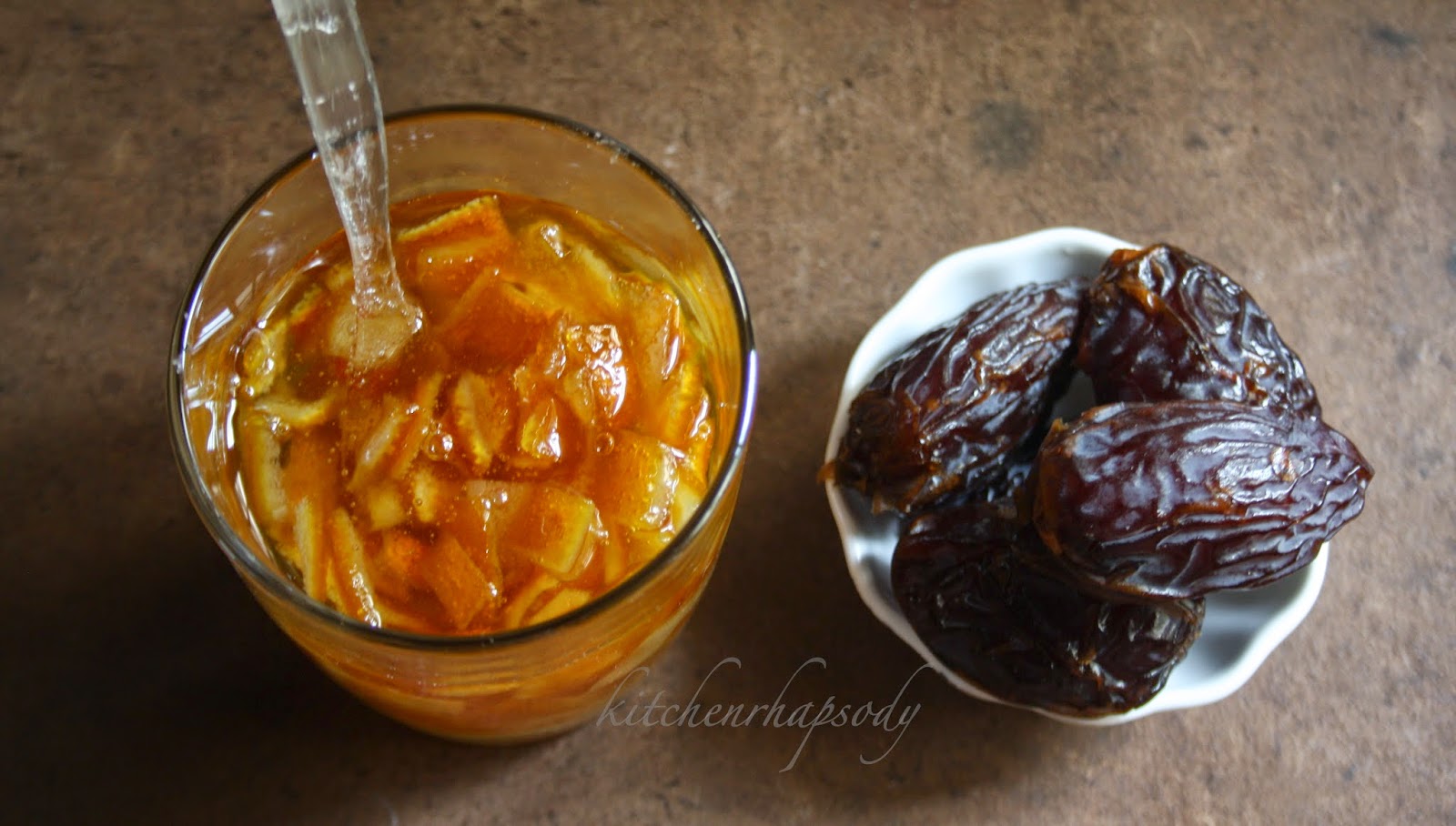 Meanwhile using a knife peel off the white pith from the blanched orange segments and cut the orange skin in to small pieces.
When all the sugar is melted and begins to boil add the chopped orange peel and cook on low heat for  about 15 minutes. Remove from heat, when cool, store in a jar.
Note:
Use nuts and chocolate chips if desired.
The drained orange flavoured sugar syrup can be used in cakes, in making lemonades or to make tea. 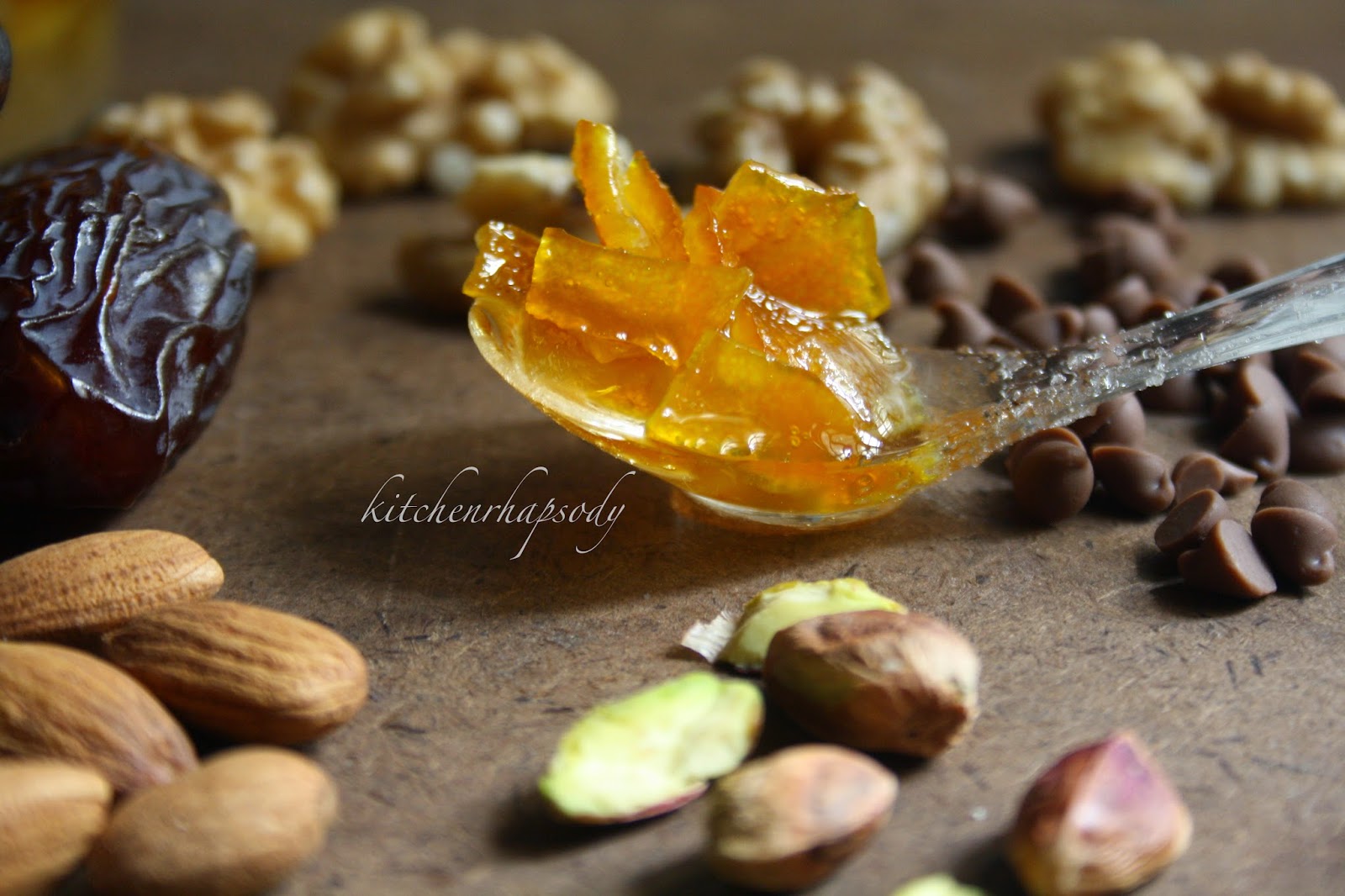 By the way you are listening to the music composed by my son! The second one is the cover version of a movie song.

Tell me what you think
Hiya all,
Finally on this day of october the 1st, 2012, I have decided to include the comment form, after a long gap of two years. But, I am going to be a bit selfish here and keep all those nice and lovely things that is said for me and only me to cherish and will be sharing any queries that requires clarifications and your experience about the food if you have tried my recipes. So, drop in a word if you have anything to say and thanks a lot for stopping by.
"Have a nice day"